Eatwild: Helping Urbanites out of the Food Grid

At The Sound we love digging into the ideas and values that impact the fabric of our daily lives. As part of our Fringestream series, we are particularly interested in movements that used to be on the fringe but are now becoming mainstream. With our continuing exploration of trends in pursuit of a more inclusive, sustainable, self-sufficient food culture, we caught up with Dylan Eyers and Shelley Milstein, co-founders of EatWild, a Vancouver-based organization that tries to dispel misunderstandings about hunting to empower a more self-sufficient local food system and healthier urban populations.

Tell us about EatWild. What do you do? How did it get started?

Dylan: I grew up in a family that hunted. I was really passionate about hunting, but it seemed like I was the only kid in Vancouver who was into hunting. While at university in Prince George and later within my community in East Vancouver, very few people hunted or had an understanding of what hunting was all about. In recent years, there seemed to be an emergence of interest in learning about how to hunt. As an experienced and passionate hunter I was well suited to help people learn more about hunting in Vancouver. I started teaching the provincial hunter safety course that’s required to qualify for a hunter license. More and more people started coming and asking me how to get started. Now I teach it monthly, and it fills up.

It was pretty easy to build from there and I realized the kind of people who were coming to me – Urbanites. They were really starting with a limited understanding of the outdoors, nature and where to start when it comes to hunting. I wanted to build a program to help urban folks build up the skills, knowledge and confidence to safely and ethically take up hunting…and hopefully have success and fill their freezer with wild meat.

Shelly: I was one of those people. I grew up in West Vancouver, terrified of the outdoors, a vegetarian for years, terrified of guns. Now, four seasons later, all I care about is going hunting and spending every weekend outside.

I manage and host the social events. When the project started we were roommates and it was clear he was the hunter and had the vision and I had the support skills he needed. It’s a really good fit.

What are the people who come to your programs looking for?

D: The urban people who are drawn to EatWild for its ethics mostly come to the field skills workshop. They are blown away! We teach people to tie knots, to build a fire, and they think it’s amazing! This is a really really basic starting point.

S: But in Vancouver, you don’t even get to practice those skills.

D: Everyone in my class is trying to change their life, trying to make a difference in where their food comes from. 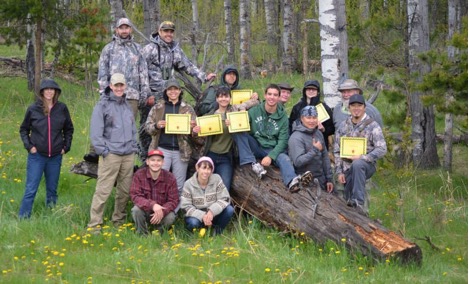 What’s wrong with today’s food culture that makes people feel like they need a change?

S: Where do you start with the industrial food system? There are a million reasons!

D: Do you know cows produce more greenhouse gases than all the vehicles in the world combined?

S: Hunting isn’t going to be for everyone, but it does promote a local food system. And it changes the way people perceive that piece of meat on their plate. It’s very easy to be dismissive when you go to the grocery store and buy something for pretty cheap. It’s easy to waste a bit of it.

But when you have to work your ass off to get that animal, and see it going from a living, breathing being to a dead animal, you take that a lot more seriously. It’s a big deal, and it makes people use resources more wisely.

Why is hunting important? Why not just buy from a local farmer?

D: Not everybody can hunt. But what’s important is it provides and alternative for people to source protein for their family from their local area. Last week was the last week of the deer season, and there were tons of hunters out there, kind of panicking, because if they don’t get their deer, then they have to go buy cow from Safeway. And that makes for a completely different year. If you harvest your own food, you plan your whole season around making sure you can sustain yourself.

S: Equally important, this whole program gets people outdoors, outside, tuning into the seasons and ecology, paying attention to what’s out there and learning about landscapes and ecosystems. Because our clients are urban folks, they are out of touch with things.

What have we lost by not having a connection to our food, and to the seasons?

D: I grew up in a family that hunted and fished for food. We didn’t buy meat or fish from a grocery store. My grandfather moved to Vancouver after the war from Manitoba. He grew up in a Metis community where he hunted, fished and trapped as a way of life. His way of maintaining that connection to his heritage and the land was building birch bark canoes, teaching people about the paddling culture, and hunting moose. We grew up with the mindset that you shot a moose every year so you could eat.

I also have a history of mental illness in my family; my dad committed suicide when he was about 60. His way of managing his mental wellbeing was to get outside and connect with nature, and always have a next trip planned, to go on an adventure. And that’s what I do to maintain my mental wellness. Being healthy in the head is important. Get out there.

I manage provincial parks for a living. I have a degree in recreational studies and park management. People are healthier when they spend time outside, when they look forward to spending time outside. Studies show this. The science is there.

D: Wildlife populations are completely reliant on the availability of habitat. If we continue to lose habitat then it will change how I can source my food as a hunter. When you have to rely on old growth trees to be there so the deer are there, so you can harvest it and eat it, all of a sudden your weekend climbing or skiing or hiking is not just about the physical adventure, but you have to take care so those ecosystems are there next year. You have to pay attention so some pipeline doesn’t come through and flatten it. You can be much more tuned in to what’s happening in nature as a hunter.

So you feel a responsibility as a hunter?

S: Hunters can be perceived as a sort of redneck, gun-toting, asshole-y group of beer drinking guys. And a big part of what EatWild does is try to dispel these myths.

D: I encourage people to take the opportunity as new hunters to diffuse those negative stereotypes by sharing what hunting means to you.

If people don’t understand and empathize with my motivations to hunt, they won’t support me. We live in a society where the urban center will control the rules and regulations of what happens on our land base. If the people in Vancouver don’t want pipelines, we won’t have pipelines. When the average person doesn’t understand or empathize, there will be a government who comes in and says we’re going to take things away from some people who really care. It’s up to us to share what we do and build empathy and positive stereotypes.

S: We also started a women’s hunting group this year. We’ve seen a tendency of women to fall behind and let the men take the lead. For some women it’s more comfortable when they learn in a group of women; it’s not unique to hunting. But our group has two amazing woman instructors in firearms and hunting, and the women are really hungry for mentorship and education.

Where do you find pride in being a hunter?

D: I’m not a trophy hunter. This year I shot what would be considered a trophy size mule deer. I was pleased to have taken this amazing animal, but what really motivates me is having consistent hunter success. I’ve shot a white tailed deer every year since I was 15 years old. That means that I have had deer in the freezer every year. To me that’s more of a significant representation of what I’m proud of. Every year I can host dinners and I can feed my friends and family, and take care of the people who are important to me.

Do you think this is going to remain fringe or become important for the mainstream?

S: The world is changing rapidly, I think climate change is going to change a lot of where we live and how and where we are able to get resources. So I hope it’s not a trend, I hope it’s here to stay. It’s not a solution for everyone, but it’s a solution, and it’s just one way to support a diverse local food system.