Imagine the scene… It’s annual brand planning time and leadership has just realized Millennials no longer have the market cornered on youth! Who is this next generation? These people are sometimes called Generation Z?! What do you know about them? Nearly a decade ago The Sound looked into its crystal ball and saw a future where brands would be clamoring to better understand this next generation that now makes up 32 percent of the global population and is controlling $44 billion in discretionary spending. Luckily we’ve spent a lot of time getting familiar with who they are, what matters to them and why it will matter to you. We have you covered; check out our fresh report.

Jump to the report 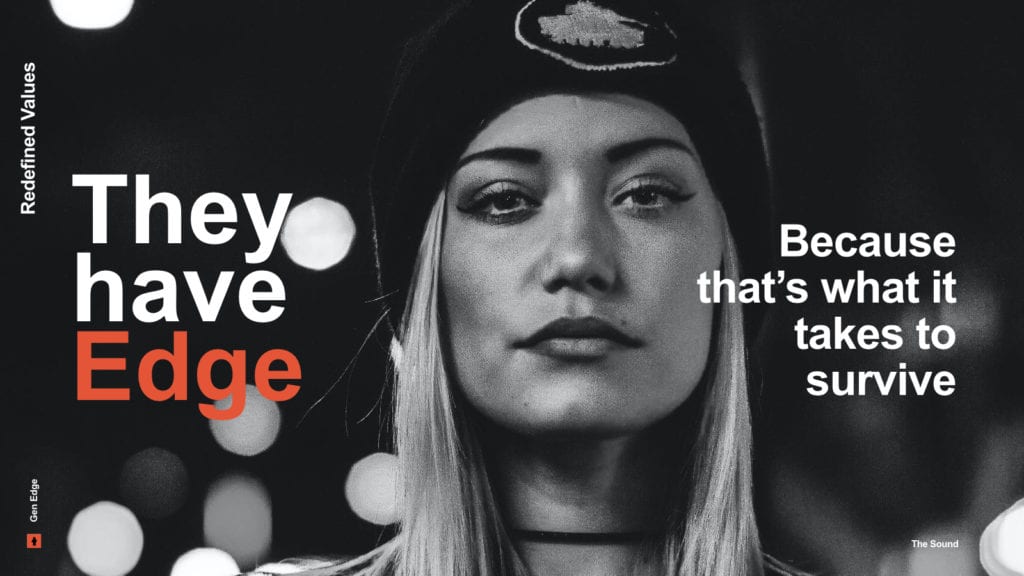 Here at The Sound, we call them Gen Edge because they deserve a lot more than just the name Gen Z. Because it takes edge to thrive in today’s world. Globalization, terrorism, refugee crisis, the recession of ‘08, negativity from social media: this generation is born into a world on the knife’s edge of change, on the edge of collapse, and they are highly aware of what is outside their door. Not to mention, this age group has Generation X parents who actively encourage them to think differently and to challenge the status quo.

Strong in numbers, Gen Z (aka Gen Z, iGeneration or Next Gen) are often simply assumed to be similar to Millennials. But, they are not just youthful, tech-savvy social media addicts, they have way more far-reaching voices and their socially conscious beliefs and values are already making a real impact on the world. We examined the world around Gen Z and their reaction to it, discovered their values and drew practical implications for brands. So let’s dive in…
(Download the report) 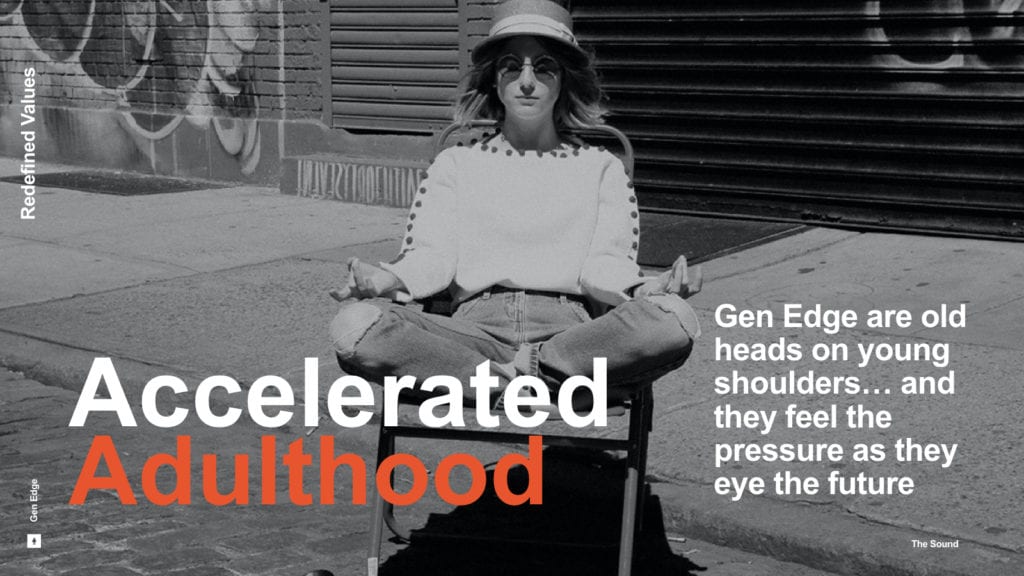 Gen Z’s awareness of global issues and premature exposure to adult anxieties has resulted in a more mature understanding of the world. They exude a strong sense of self and a desire to find meaning in their lives beyond video games, Facebook and high school formals.

They are pragmatic and financially-conscious. In comparison with Millennials who often live in their extended adolescence, Gen Edgers focus on financial security. They are now absolutely concerned about affording college. But instead of just worrying about it, they’re saving for it (and possibly still worrying about it).

For Generation Z, future projections of themselves are much more grounded in reality.

If they can’t see it, touch it or feel it, it doesn’t exist. The economic downturn exposed them to the scarcity and competitive nature of the ‘working world’. Encouraged by their Gen X parents to set practical goals and pursue growing professions that will make them happy and provide them with a decent living Gen Z seem to have a sense of perspective far beyond their years. 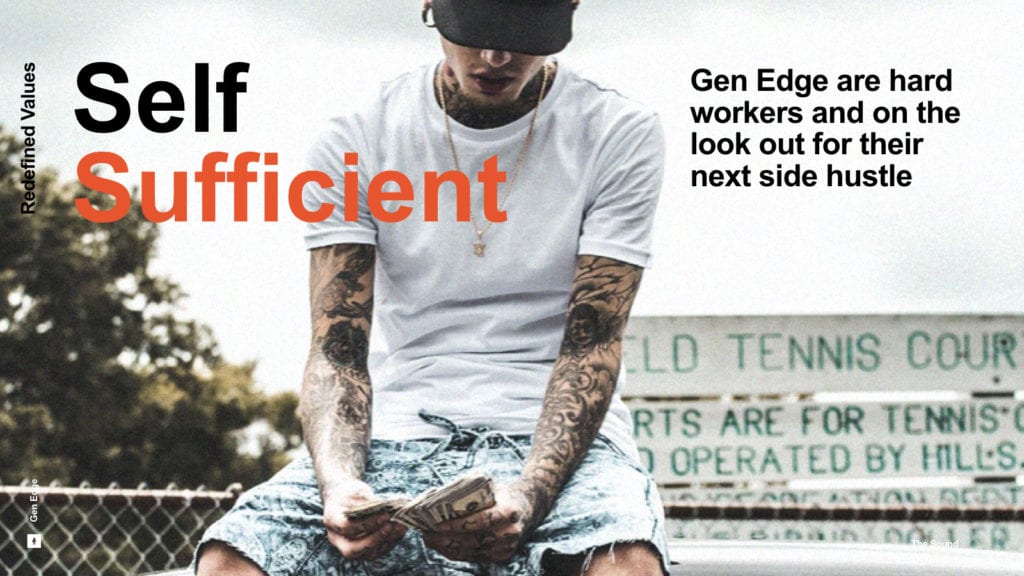 Boomers: ‘World be aware, Millennials are here… prepare for my baby!’

Generation X: “Baby, it’s tough out there. You better prepare for the world.”

This is one factor that has contributed to a generation of hustlers. Gen Z are highly entrepreneurial. Rolling up their sleeves and looking for ways to turn side hustles into success.

‘A lot of people seem to think that all teenagers are super-misguided and not at all ambitious. Such a high proportion of the people my age I know are super-driven, super-focused and super-creative in a way I haven’t seen a lot of adults being’,

They see themselves as the hardest working teenagers for generations. According to a recent study, in 2019 about 41% of Gen Z would rather be an entrepreneur instead of an employee when they graduate college. And almost half believe they’ll invent something that changes the world.

Understand
their core values
from their perspective
and with empathy
not judgment. 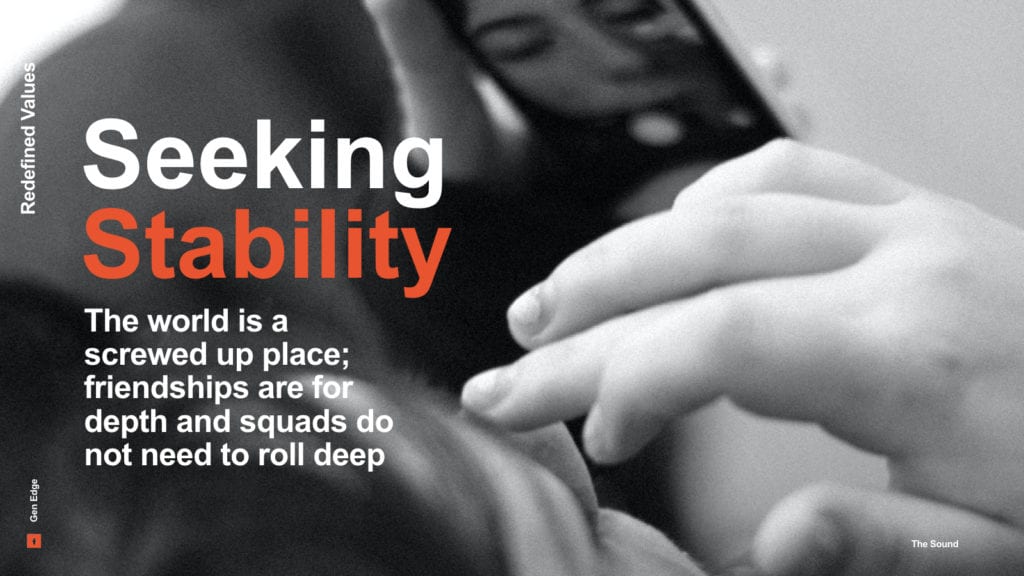 The world is a screwed up place. Friendships are for depth and squads do not need to roll deep. They’re digital natives, boldly looking toward the future, but also surprisingly old-fashioned. They are dependent on smartphones as a source of continuous entertainment but turn to real people for input or advice. Whether that’s a YouTube influencer or their friends in real life, Gen Zers care a lot about the opinions of their peers.

Gen Z may be the most technologically advanced generation ever, but they prefer socializing offline.

And they do so in small groups and often at home. So it may come as no surprise that jigsaw puzzles, a perfect night in activity, have come back into fashion in recent years, with new brands like ‘Jiggy’ making puzzles worthy of a frame and retailers like Shopbop and Anthropologie getting in on the action. 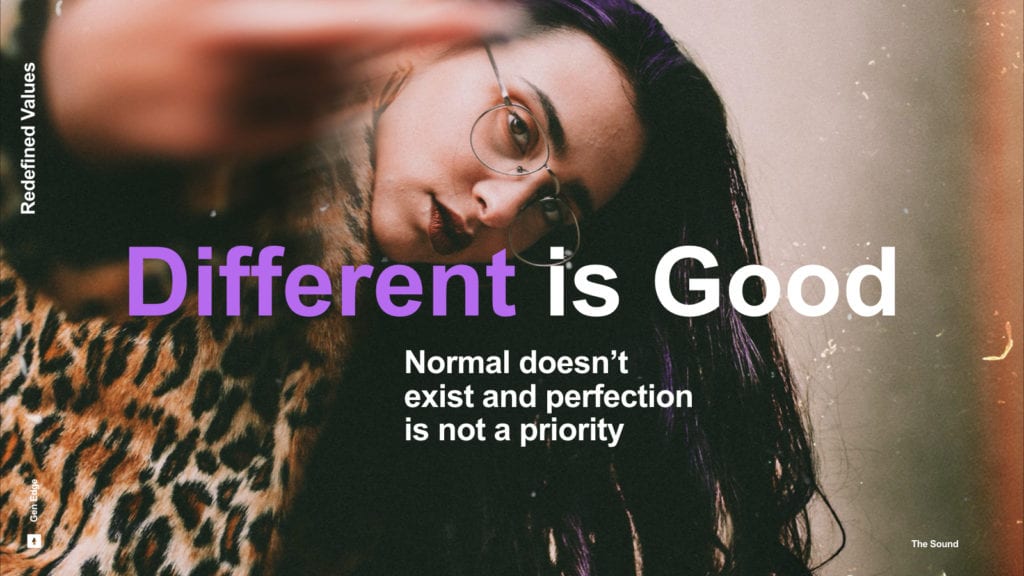 Normal doesn’t exist and perfection is not a priority. Diversity isn’t strived for… it just is. Sexism, racism, LGBTQ2 rights, environmentalism, and animal rights hit home because they are naturally interpersonal and connect with the core values of Gen Edgers. As a result, Edgers place far more weight and importance on being different, bringing something interesting to the table, and standing out from all their peers.

To ‘belong’ in this cohort means you have to be comfortable being you… in all it’s quirky, special, unique ways. Some brands offer them many interesting means of demonstrating their unique identities, e.g. the Aerie Real campaign has garnered accolades for its depiction of diverse role models as well as a commitment to ditch the airbrush and embrace body positivity and acceptance… all critically important to the desire of today’s teens and youth for more truth in advertising.

According to Pew Research, almost half of American Gen-Zers are ethnic minorities (48%) and a third know someone who uses gender-neutral pronouns (35%). No wonder it’s important for brands to be inclusive. Generation Z expects diversity from any and all institutions they align themselves with. Brands must consider ways to allow their message, content or products to drive the individualism or competitive differentiation that Edgers crave. 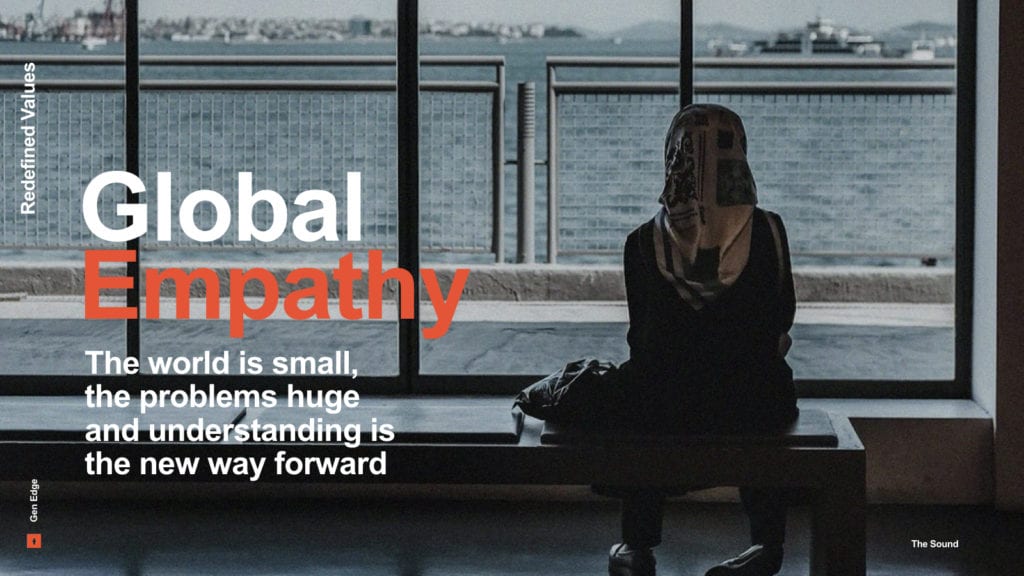 The world is small, the problems huge and understanding is the new way forward. Considering their empathetic nature, social causes will become an even more effective means of driving loyalty…if you mean it.

Gen Z group up with social media, but typical channels such as Facebook and Twitter don’t make a big impact on their lives. This is largely because they are seen to have become toxic and negative. Teens see Tik Tok as a global tapestry of people, largely being their real, awkward selves, where they can applaud others for being their real, awkward selves (mostly without the heavy influencer and brand polish that has crept into other platforms). And in that realness that is exposed in short video clips, Gen Z feels a little more connected to other delightful weirdos thousands of miles away. 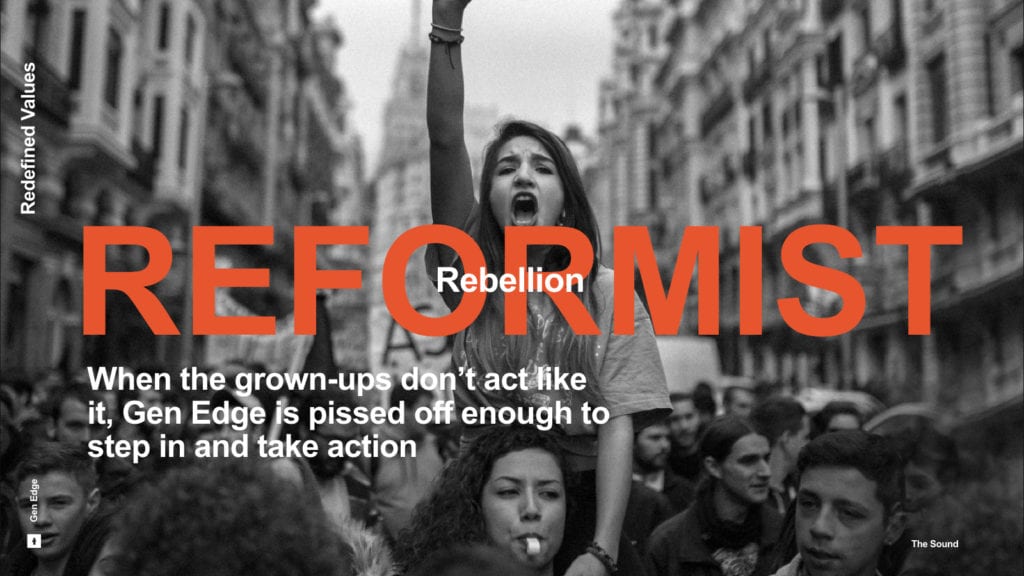 Generation Z are far more rebellious than the generation before them, the Millennials. However, the Gen Edge version of rebellion is not a destructive or nihilistic force ‐ it is a drive towards reform. They have watched Millennials talking the talk but changing very little. And they are deeply unimpressed.

In their formative years, these young people watched the banks get bailed only to pay themselves huge bonuses. They’ve seen big corporations paying no tax. They have watched their parents work harder and harder for less and less. They have learned that the beef they were eating was actually horse.

The result of this is a generation that doesn’t trust brands, corporations, and institutions. In fact, they openly challenge them.

Before Gen Edgers have an opportunity to challenge your brand it’s important to lay your cards on the table and be honest and open with your consumers. They will notice when you’re not genuine or oppose their pro-social values… and they’ll tell the world.

They feel they have a responsibility to change things. Culture and technology have changed things too. Behavior which previous generations thought was transgressive is now normal.

A brand that is inherently a category challenger and disrupter potentially has a lot to gain with Gen Edge – think Virgin, Giff Gaff, Tesla. These are brands that have acted on their dissatisfaction with their category and tried to do something different. Remember, Gen Edgers stir things up for a reason, and not just to get a reaction, and they respect brands that do the same.

They have Edge.
That’s what it takes
to survive.

In our Gen Edge: Refresh report, we’ve got close to Generation Z. On our blog, we are continuing to cover their relationship with everything from luxury to education to technology. We made it our mission to understand their core values, from their perspective.

Creating their story and reality with empathy over judgment, is how brands should get smart on the next wave of youth.

Still wondering why this should matter to you? Only by prioritizing connections with youth culture and understanding their core values, brands can develop a successful customer experience strategy, improve product innovation and enhance marketing efforts.

Want to chat more about it? Download it here and learn more!