Why We Use Documentaries to Help Marketers

Why a brand strategy agency is using documentaries to help marketers

The Sound is using stories about society’s fringes to help brands learn more about the mainstream.

Documentary filmmaking is hot right now. As the means to make a movie get cheaper, and people better understand what kinds of stories are worth telling, the appetite for nonfiction storytelling on our various screens has grown. And while stories about, say, pop stars who died young and tragically or delightful animals in their natural environments certainly sell, there’s plenty of room to innovate and see what else we can learn by following around interesting people and documenting what happens.

Figuring out what there is to learn from documentary films is a big part of the business at The Sound. The global research, innovation, and brand strategy agency launched in 2006, and over the past decade, president and chief ideas officer Ian Pierpoint says that they’ve made close to 100 documentaries per year for their clients, on subjects ranging from mobile technology in India to the lower-middle class in the U.S., to help them understand various markets. But five years ago, after Pierpoint became a father, the agency decided to make a documentary about dads that changed their philosophy around this kind of filmmaking.

“We thought there was something interesting happening around modern parenting—particularly the role of the dad within that,” Pierpoint says. “We wanted to show it to our clients to get them to think differently about parenting and targeting dads, as well as moms.”

That documentary captured a lot of different ways of being a dad, and The Sound screened it around the world for their clients, and found that afterward, the clients didn’t want to talk about advertising—they wanted to talk about fatherhood. “We realized we created something inspiring here that was inspiring people in different ways, so we decided to shop it around,” Pierpoint says. The documentary sold to broadcasters in 17 countries, which encouraged Pierpoint to launch The Sound Media, a division of The Sound devoted strictly to documentaries. 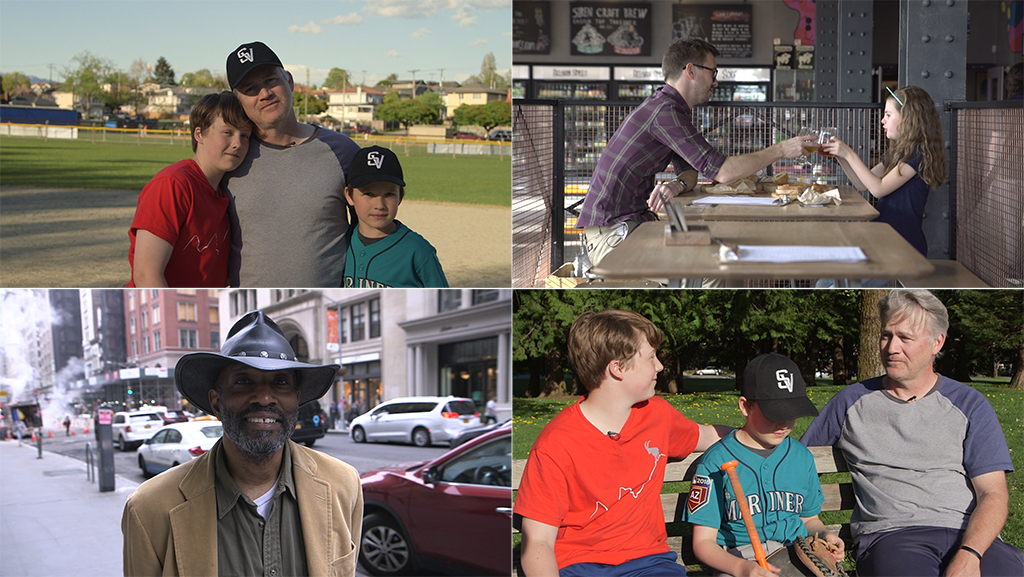 “We had the vision of creating content, with the core market being people who work in marketing, brands, advertising, and communications, but with a crossover appeal. We did it once successfully, so we thought why not do more of it? We like doing it.”

Using documentary filmmaking as a way to illuminate and bring insights about a specific group isn’t new—it’s rather the whole point of documentary filmmaking, ultimately—but the idea of targeting those techniques to people who are going to use them to better understand market segments makes a lot of sense. Brands have many questions about specific groups, and about how those groups relate to their brand, but what The Sound Media wants to do is help them understand those groups in a broader, more holistic sense.

“No client is coming to us and saying, ‘We want to understand dads in a broader context. We don’t want to ask them about brands; we just want to be inspired by fatherhood,’” Pierpoint laughs. “So what we’re trying to do now is tell the stories of people who are doing inspiring or influential things that are outside of what brands usually think about. It’s more about getting brands to think differently by telling stories that trigger something in them that they wouldn’t otherwise have thought about.”

To that end, the first short documentary that The Sound Media is about to release is about a couple in Port Townsend, Washington, who live as Victorians. (You may have heard of them—they became Internet famous about a year ago.) Pierpoint’s team went into their candlelit house to capture what they’re doing and how they’re living. “I guarantee that represents not .0000000001% of the population,” Pierpoint says.

“No brand is thinking, ‘We’re going to target people who live as Victorians.'”

But their story, and why they’re doing it, and the way that they’re doing it actually tells us a shitload about frustrations with modern society, and the role of technology in our lives—it tells us about our fascination with the past, and what seems to be simpler times. A client would never commission that—but I guarantee you that they’ll watch it, and it’ll make them think about their company and the people they’re targeting in a different way.”

By looking at the extremes of any given group, or any given way of life, the insights there can be more informative than by looking at mushy middles. “By exploring the fringes of culture, and shining a light on things that perhaps 20 years ago wouldn’t have been aspirational—they would have been outsiders,” he says. “Now, though, the fringes are much more inspirational.”

To that end, The Sound Media looked at others on the fringes—people who are living outside of the mainstream and off-the-grid in other places, such as Lasqueti Island, off the coast of Vancouver. Those people, Pierpoint says, are more predictable—they’ve got long beards, bad teeth, and axes to grind—which makes the Victorians more compelling as a documentary subject, by looking at the fringes of the fringes. Forthcoming documentaries will look at subjects such as American politics—Pierpoint talks to a group called Fuck The Vote, full of young people who reject the idea of voting—”drag mothers,” craft beer boxing tournaments, and more.

Not all of those subjects are fringe (other documentaries will talk about the business of marijuana and London antiquing). The focus, Pierpoint says, is on interesting stories—but either way, looking at the fringes isn’t just about taking these misfits and finding ways to inspire people by the weird ways they live. The more extreme the subjects, Pierpoint says, the better we can understand the mainstream, too.

“I’ve learned from 20 year of doing research that, if I wanted to understand love, I could go out and talk to a bunch of people who are in love. They’ll tell me all about love—how it makes them feel, all the gooey stuff, whatever. I guarantee you that I’ll learn more about love if I talk to four people who’ve gone through a breakup, and who are therefore on the fringes of love,” says Pierpoint. “If I want to learn about technology, it’s extremely hard for us to talk about it. But if I take away every piece of technology you have and come back in a week and say, ‘What’s life like?’, you’ll be able to tell us about it. More often than not, by going to the fringes—as long as you’re going to the fringe of a trend that’s real—you’ll learn more about the subject, more quickly, and in a more entertaining way.”

This article was written by Dan Soloman and originally appeared on Fast Company on April 12, 2016.