Get Your Head Around the Movement or Move Over

The legalisation of weed is progressive controversial at its best, and ignorant at its worst. As a strategist and qualitative researcher my job is to hear people’s stories, understand who they are and unearth unmet needs. This is how brands get to those ‘unicorn’ insights that unlock triple digit million dollar innovation ideas or viral campaigns. I collect these stories at work, in transit and probably to the annoyance of my family and friends, in my personal life. I love each and every one of them. Every once and awhile you come across a story that touches you and stays with you. Grace’s story did just that. In a world where cancer has touched everybody, you would think the road for alternative medicines would be a more open one, and luckily it’s starting to look that way.

When you think about a typical ‘person into the weed movement’ (me being ‘a person into the weed movement’, just to be clear), you typically picture a guy, potentially an older hippie with a greying ponytail or wearing a Nirvana or weed memorabilia t-shirt, on a Peter Pan quest. If this is your thinking, stop. I’m serious. Stop. Meeting Grace this summer in Victoria, BC put a very different face and a very different perspective on legalisation advocacy.

Whether you or a loved one has been impacted by cancer, crippling arthritis, anxiety, insomnia or aggressive period pains (trust me when I say the list goes on), there is a bud, a pill, a tincture, a cream, a bubble bath for that. Peeling back the layers of our Weed series, you will discover that there is a very high functioning (pun semi-intended), beautifully branded, encouragingly funded category that is filling multiple consumer needs (and desires, because let’s be honest, we’re all in that business). The marijuana industry, if managed correctly, is set to take over not just our hospitals but our social spaces, our spas, our beauty and fashion worlds and our homes, in a very impactful and powerful way. 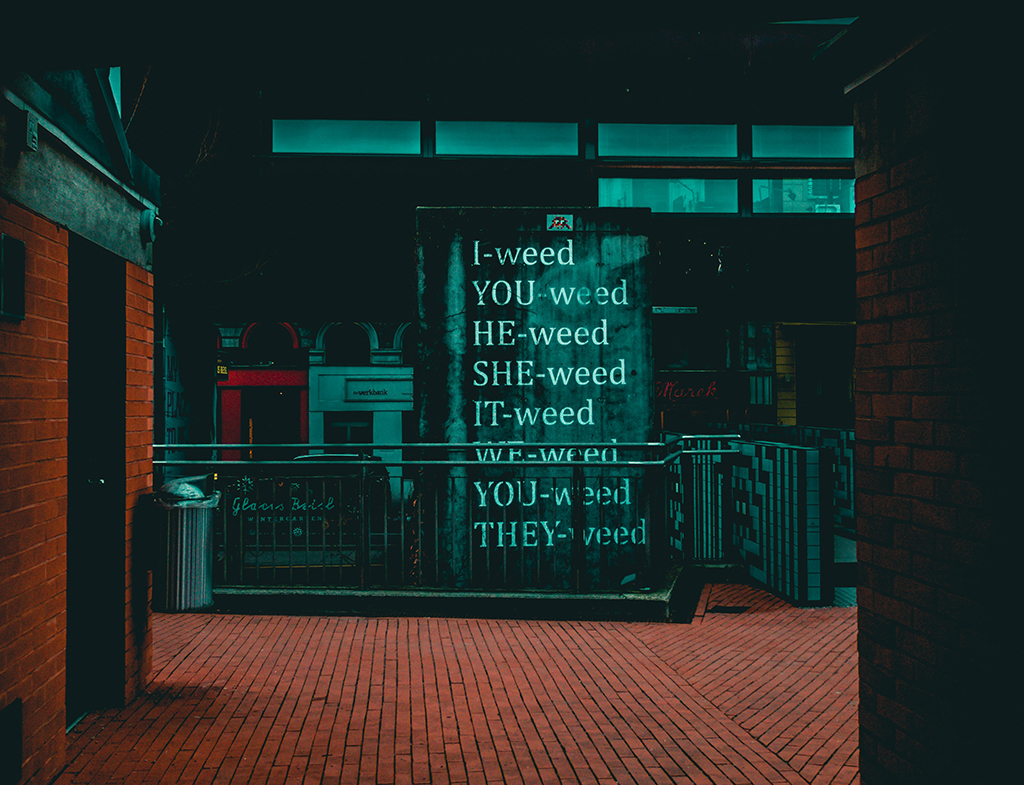 Photo by Markos Mant on Unsplash

Over the next few months you’ll have the opportunity to learn the stories of how people became passionate about the industry and how they are changing the medical and marketing world, seeing some potential future faces of this movement. I can feel confident that one of these potential, brilliant, smart, witty and wonderful faces is Grace…

Thanks for taking the time to sit with me. Could you please tell me a bit about you and your history and how you became associated with the cannabis industry?

Hi, my name is Grace Hutchinson, I’m 20 years old and am living in Victoria BC as a fine arts student at the University of Victoria.  I was born in the UK and moved to Alberta, Canada when I was 6, finally coming to White Rock, BC in 2008.

I lost my mother and my sister to cancer, which motivated my father to become involved in the medical cannabis world, which trickled down to me.

So both you and your father are active advocates for the legalization of cannabis/medical marijuana… Can you tell me a bit about your journey into this advocacy?

After losing my mother to cancer, I saw my dad successfully use cannabis to help my sister’s condition improve. After seeing the physical evidence of cannabis as medicine, it was hard to stay away! I had little interest in “weed” when I was younger but I got into it because I saw how many people really need to hear this information.

I’ve been using it medicinally myself and the relief cannabis can offer is staggering.

It’s so important to make this information accessible. I now work at a medicinal dispensary called Victoria’s Natural Way, which is super rewarding as I get to help customers face-to-face and see the benefits.

So what role does cannabis play in your life right now, and what were your perceptions of prior of advocacy?

I saw cannabis as the gateway drug, I knew it wasn’t as bad as other drugs but to me it was worse than drinking. I’ve completely switched views on that one now though. Cannabis plays a pretty big role in my life, as I use it throughout the day, and I also work at the dispensary four days a week. It’s quite a common theme in my day-to-day life, which is something I would have never expected of myself five years ago.

In your opinion, how important is legalization and access to medical marijuana?

If the goal of making drugs illegal is to stop people using them, then clearly this is a failed system. Cannabis irrefutably has medical benefits, from all but curing epilepsy to helping you sleep, and I believe there are so many people who would benefit from cannabis.

We see this in states where it becomes legalized, especially as older generations are starting to turn away from prescription pills. Cannabis should not be handled in the same class as heroin, especially as it’s far less dangerous than alcohol. By making it legal, it can be properly regulated to keep it out of the black market and away from kids. I’ve always told people that it’s easier to get weed as a kid than a six pack of beer.

Do we really want the drug dealers to decide who can buy their product? Or do we want government regulated, top quality medication?

What are some of the challenges in terms of perceptions of legalization of marijuana?

Cannabis is especially unique, seeing as it does have medical properties. There are a lot of people who grew up in the “reefer madness” age, and still have a hard time seeing past that misconception. I think it will change pretty quickly, but I also think Canada, as an example, may need to lead by example.

What are some of the positive impacts of cannabis/medical marijuana, in your opinion?

Cannabis is literally saving peoples lives, and giving them their bodies back.

Straight off the bat, it is pretty much impossible to overdose from cannabis. Prescription pill overdoses seem to keep getting more and more common, but cannabis doesn’t have that danger to it. There is also such a variety of ways you can ingest cannabis, which makes it accessible for everyone. You can choose purely CBD products so that there is no high. The side effects are basically the expected stoner stereotype, but they can all easily be avoided or handled. Cannabis is literally saving peoples lives, and giving them their bodies back. When we have laws that are stopping an epileptic child from getting her needed CBD oil, there’s a problem.

What are some of the negative impacts of legalization and how would you limit the impact, given the chance?

The difficulties of taxing cannabis can be tough, and it’s been done both very right and very wrong in different legal states in the US. It’s important to tax it enough so that it’s a lucrative sector, but the price must also be below the black market. Otherwise, everyone will just keep buying cheaper product from their dealers.

If you were to describe a perfect world in the context of legalization, what would that look like?

I think that cannabis can be regulated in two ways: Medically and recreationally. Recreationally, I believe cannabis should be sold like alcohol. Bought with an ID, sold by regulated dispensaries and taxed. Medically, I believe it shouldn’t be taxed, and those underage would need doctors notes for access to CBD products.

What advice for you give people that are against legalization?

But seriously, I would recommend trying some form of a cannabis product, even a topical salve for arthritis. Seeing is believing for a lot of people, and cannabis really proves itself. I know we make it sound like a miracle drug a lot of the time, but it seriously it is an amazing plant and the benefits are mind-blowing. For those who are still against that, I would ask them to look at the people who are suffering without cannabis. From the two year old girl suffering from 300 seizures a day to the elderly lady with arthritis who can’t garden anymore, actually consider what you’re asking them to go through without cannabis.  Do they really want to tell these patients they can’t use the only relief they’ve found and to go back to the endless list of prescription medications that each have their own side effects.

We have the ability, the knowledge, and THE plant to change peoples lives drastically. Let’s work together to do that.