Whether it’s meditation, to do lists, breakfast or a dash to the door, we all have a morning ritual. These AM habits can create a sense of structure and manageability for each day or they can perpetuate a sense of dread and chaos. Who better to talk to than a man caught in the midst of the struggle.

After leaving the corporate world to become a freelancer, “Alexander M.” was hit with the stark reality that his productivity and paycheck truly depends on his own ability to set and stick to healthy morning habits…and it’s something that he’s had to put a lot of thought into, having had to rebuild it from square one.

“The second we wake up, we start with a blank canvas and then the things that we surround ourselves with quickly remind us of all of our obligations.”

When Alex started working for himself, he no longer had the same life routine that most others do; where they tend to build their life around their commute. Working backwards from this obligation, we weigh out the bare essentials in timed increments: grooming and necessary hygiene, waking the kids, walking the dog, or making coffee. From there, we might tack on additional time for makeup, reading the news, or checking emails. The most ambitious of us try to carve out time for meditation, journaling, creating to do lists, working out, or setting our intentions for the day. However, without the demands of a 9 to 5, children, or pets on his time, Alex found himself lacking direction on what and when to prioritize.

Alex: “What I have not focused on yet is the separation of how I make my money versus how I live my life. And right now it’s all kind of like jumbled into one big thing…that fucking table. It just feels like, I look at that every day and I’m like, “Yeah there’s nothing really too pressing in there. But just looking at it is frustrating…it doesn’t feel good… So if you don’t build the rules, this is what you get.” 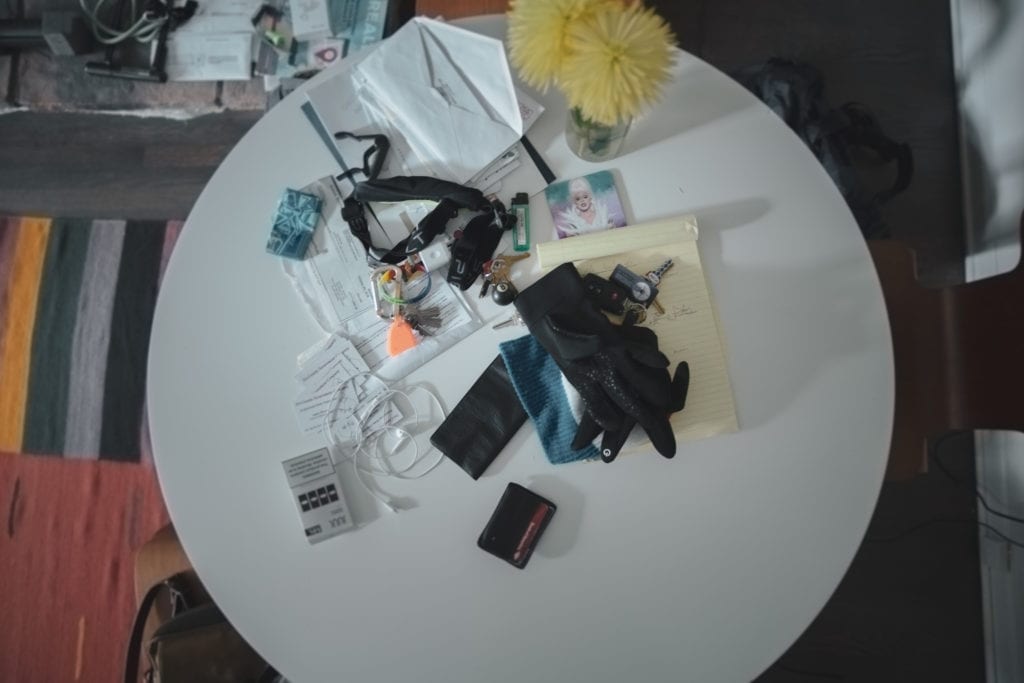 The word “balance”, with respect to our work and personal lives, has been overused almost to the point of mockery. Our lives are filled with demands, and more often than not, the scale can tip towards focusing on what needs to get done rather than what we need. It’s also way too easy to fall into the distraction vortex of Facebook, Instagram, Reddit etc.

Alex: “The second we wake up, we start with a blank canvas and then the things that we surround ourselves with quickly remind us of all of our obligations, responsibilities, our relationships, et cetera. And so the priming of your brain for the day in the morning when you wake up is the most important part I think.”

Knowing this, Alex has spent the last year figuring out what his fundamentals are for a healthy daily outlook. The core of his routine having developed around three things…waking up, stretching his body for 10 minutes or so, hydrating with some turmeric, lemon and apple cider vinegar, some then performing some sort of cleaning task. In this instance, emptying the dishwasher.

“I’m lazy; I’m not somebody who loves to fucking meditate in the morning. But I know if I can have some coffee, then I can do some yoga, and then at the end of my yoga I’ll be in a better mood.”

Alex willingly admits that every day doesn’t look like this, and that there’s plenty of room for growth. That “fucking table” still exists, but he hopes that by having a healthy routine to build upon, the next hurdle of organization might be just a little bit easier.

By shifting the focus away from outside demands and creating an obligation for ourselves, a thoughtful morning routine can have a ripple effect each day. There’s plenty of room for improvement between a roll out of bed and rush routine and a morning spiritual quest, and we owe it to ourselves to take our needs into consideration.